The earliest traces of human settlements in Oman appear to be from the fourth millennium B.C. The burial mounds or the beehive tombs that are found around Ibri and on the Jebel Bani Jabir plateau provide the only links to this early civilization. Not much else is known about the early settlements in Oman.

What is agreed upon by most historians is the fact that Oman had a long and enviable trading history. Mesopotamian records describe trade with ships from Magan and Dilum. Magan, believed to be present day Sohar, was once the centre of copper trade. Trading accounts from the Indus Valley civilization, the Sumerian and Assyrian civilizations all mention the seafaring port of Magan and attribute their economic success to trade with Magan.

Copper assumed importance in the later pre – Islamic times and played a large part in Oman’s economic prosperity since then. Islam spread across Oman with the acceptance of Islam as their religion by the then ruling Azdi tribe, in the early 7th century. The ruling Azdi tribes till then were pagan worshippers. The Portuguese occupied the country for over 150 years. With little interest in solidifying their presence in the country, apart from controlling trade, coupled with the changing fortunes of their colonization strategy worldwide, the Portuguese were ousted by the far sighted leader of the Al – Ya’ruba dynasty, Imam Nasir bin Murshid Al – Ya’ruba in 1650. Henceforth, under the rule of the Ya’ruba dynasty, Oman became a unified nation state with its influence stretching as far as Asia and Africa. The Ya’ruba Dynasty ruled Oman till 1743. After the death of Sultan bin Murshid at the battle of Sohar, the then Governor of Sohar, Sheikh Ahmed bin Said Al Busaid, who fought alongside the Sultan in the same battle, was nominated by the ulema as the next Imam. Known as an astute military strategist, he called for a cease fire with the warring Persians and invited the Persian military retinue to attend a huge party in their honor and on the sound of a drum, massacred the entire retinue, thereby gaining control of the country and ousting the Persians forever.  And in so doing, Imam Ahmed began a long and glorious dynasty, the Al Busaids.

Centuries of trading with other nations and an imperial history have created a race that is multi ethnic and many colored; fair, dark and brown complexions, all are part of the Omani people. Predominantly Arab, with Arabic as the official language and also language of daily use, intermarriage with other groups particularly from East Africa and Asia, has resulted in this varied ethnological mix.

Omani people have a strong sense of their tribe and usually their names indicate which tribe they belong to. The three major racial strains among Omanis include Omanis, the Baluchis and the Zanzibaris.

The Omanis, it is believed belong to two main tribes, the Hinawis and the Ghafiris. The Hinawis moved in from neighboring Yemen and the Ghafiris from Central Arabia. The Baluchis, who are originally from the region of present day Baluchistan, came into Oman as warriors and were mobilized to the Sultan’s army as mercenaries in the wars with the Persians. Today they are concentrated up the Batinah coast and speak Urdu and Arabic. The Zanzibaris migrated into Oman from Zanzibar, present day Tanzania, once a colony of the Sultan of Oman. Zanzibaris or Zinzibaris as they are often called, speak both Swahili and Arabic.

Smaller ethnic groups like the Kumzaris in the Musandam Peninsula, who speak an Indo Iranian dialect which is a mixture of Farsi, Arabic and Portuguese and the JIbbalis, a Jewish community in the Dhofar region, who speak `the language of the birds’, a completely disparate language, complete the multicultural racial picture. Trade with India resulted in the settlements of Indian traders in Oman, notably the Baniya community from Sind, many of whom though Hindu, have been granted citizenship by His Majesty Sultan Qaboos. The population of Oman today number around three million and includes about half a million expatriates.

It would not be far from truth to claim that Omanis do have a natural taste for moderation and elegance which is best observed in the restrained public buildings in the capital Muscat. This impression becomes even more validated when one sees the houses that dot the villages across the country; simple, painted with a variation of about three colors and often only one storey high. All Omani architecture, largely, follows these basic principles of simplicity, elegance and moderation. In ancient Oman, forts were a passion for the nation builders of Oman. Close to about 1000 forts dot the country and numerous watchtowers overlook hilltops. Today many of these forts are undergoing restoration as a support to the growing tourism industry, but more particularly, they help in shoring up the country’s identity, creating a sense of historical oneness and unity. Interestingly these forts, built by ancient builders, are themselves sedate and functional rather than extravagant and opulent. In hindsight, when one views the restoration of the country’s heritage in a region where skyscrapers and artificially created islands are today’s toast, one understands and definitely admires this respect for historical continuity and that is what makes Oman unique! The Aflaj is another of ancient Oman’s unique architectural creations. Once made up of thousands of kilometers of water channel networks, the aflaj is a water channel system that works on gravity. The hydraulics of the system was based on the flow of water from the foothills of the jebels, from springs directly through a man made water channel to homes and fields. In today’s Oman, apart from the elegant public buildings and the sedate private homes across the country, Oman’s architectural insight and underlying principles are best exemplified in the Sultan Qaboos Grand Mosque.

The Grand Mosque is the ultimate expression of restraint and elegance exhibiting simplicity of form and function. Set within an area of 416,000 sq. meters, the built up area of the mosque itself is 40,000 sq meters. The main prayer hall is square; 74.4 meters sq. in size and can house 6500 worshippers at any given time. The prayer carpet in the prayer hall is 263 square meters in size and it took four years to produce and weighs 21 tonnes. Perhaps the only opulence in the entire complex is the 35 chandeliers made of Swarovski crystal and gilded metals. Thirty four of these modern masterpieces light up the hall, with the central chandelier throwing light from 1122 bulbs! The architectural influences of this simple and elegant Mosque borrowed from Timurid art of Central Asia, Iranian Safavid art, Contemporary Islamic Art and Islamic Indian Mughal Art.

The Summer months are between May and September. The best time to visit Oman is between October and April when temperature ranges between 25 and 35 C during the day and between 17 and 19 C at night. Most buildings and all vehicles are air conditioned in Oman. (Click here to view mean temperatures)

Oman has many hotels and resorts to choose from, ranging from sprawling resort complexes to standalone business hotels. Most of the 5-star hotels are located in and around Muscat and a few are spread around, in Al Jabal Al Akhdar, in Salalah, in Musandam, in Sohar and in Wahiba. The larger percentage of hotels in Oman is in the 4 star and 3-star categories. Oman also has budget accommodation which is in the form of apartment hotels largely restricted to the larger cities of Oman, mainly Muscat and Salalah. Camping in Oman is part and parcel of the destination itself and Oman also boasts of some excellent camp accommodation at Wahiba. All in all, most accommodation in Oman is on the expensive side, perhaps for the fact that demand exceeds supply. The good news is a lot of International Chain Hotels are expected in the coming years. 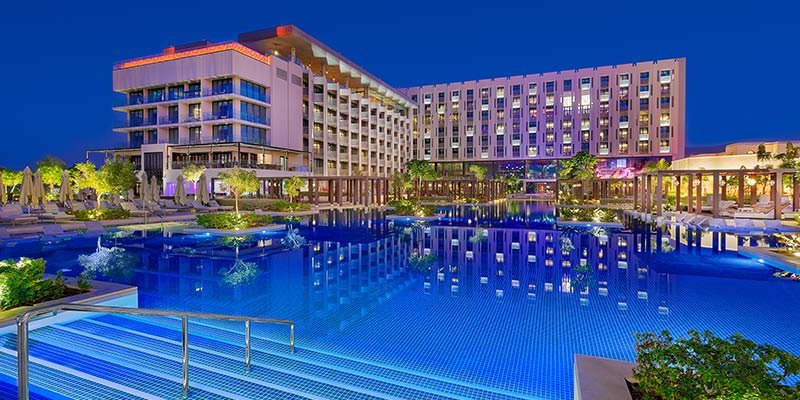 It should also be emphasized that Oman has some splendid hotels which are almost holidays in their own right. The Shangri-la Bar Al Jissah is a resort complex with its own private beach with a range of facilities catering to individuals, groups, Incentives and also families. The resort’s simplistic design, striking landscape and stunning location offer a first-class holiday experience. With an in-house dive center this resort complex is a holiday by itself.

The Al Bustan Palace, a Ritz Carlton Hotel is Oman’s premier Hotel. The pomp and elegance of this property makes it an icon of Oman and attracts a lot of high -end tourists. Muscat’s other hotels include the Grand Hyatt, a design which carries stamps of art deco styles with an Arabic touch. This marble splattered, majestic hotel is luxurious and displays extravagance. Located overlooking the Arabian Sea, you could walk endlessly on the beach or even indulge yourself at its avowed Italian restaurant, Tuscany. Then there is W Muscat, located along the azure-lined beachfront in the capital’s upbeat Shatti Al Qurum district, it boasts 279 stylish rooms and suites, where Omani heritage and contemporary design provide the perfect backdrop to an eclectic escape. Outside the room, the hotel offers a wave of daily unexpected happenings, catering to all passions and tastes. Choose from seven tantalizing B&F outlets, including rooftop paradise Siddhartha Lounge by Buddha-Bar, the stylish CHAR grill, and health-driven all-day dining restaurant, Harvest. With a wave of playful programming and an always-on approach, W Muscat is the ultimate place to kick back and soak in Oman’s vibrant energy.